Lately, I have been looking at works by the two masters - the french artist Henri Matisse who is celebrated in the West for his use of colors, and his fluid and original draftsmanship, and Binodbihari Mukherjee who was one of the pioneers of Indian modern art and a key figure of the Shantiniketan school, known for his expressionist outlook of nature portrayed in a style inspired from the far-east. Looking at their life-long collections of outstanding work, I see a strange resemblance between Matisse and Binodbihari's later years of personal occurrences and creative ventures.

Let's talk about Matisse first. Towards the end of his life, Matisse became wheelchair-bound due to a physical illness and lost the ability to work on canvases. It made him leave the canvas and choose a new technique - white papers, gouache paint, and scissors. He painted the white papers with vibrant gouache colors and cut different shapes from them. These papercuts developed into a series of mixed-media works which were a far cry from traditional painting. Matisse would cut out designs of his choice from colored paper, just like a child, and his assistants would decorate the designs on the walls of the studio according to his directions. As if a child is at play; with his indomitable desire to speak, he is bringing his dreams into the external world. A child Matisse reveals himself through his playful works of papercuts. 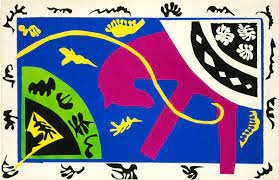 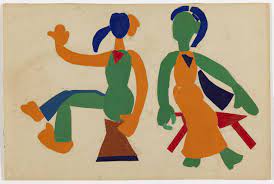 Benode Mukherjee was born with a severe eye problem. Despite being myopic in one eye and blind in the other, yet he continued to paint and do murals until he lost his eyesight completely following an unsuccessful eye cataract operation in 1956. Benode was completely heartbroken and fell into depression. Pushpa, the wife of Dinkar Kaushik, who was also an artist; encouraged Binod Bihari to create paper-cuttings, and assisted him in composing the artworks. Beautiful collages were born out of this unique collaboration between the two. Later, Binod Bihari lovingly presented these works to Pushpa.

Both of these masters had become physically disabled in their later years which made a huge impact on their creative expeditions. I see no way but to look at these papercuts and get reminded of the little ones. It is as if memories from their childhood have emerged as beautiful images. Or, they have become children again. No pulling of skilled strokes with paint brush, no trace of rigorously trained expression techniques, there is only an impression of genuine creative joy and artistic sensibility. The works of both artists are a conjunction of drawing and sculpting in color using the edge of the paper to represent both the contour and volume of forms. Benode Bihari Mukherjee who was inspired by the open air classrooms of Shantiniketan, identified strongly with the spiritual essence in the paintings of the Far-east in contrast to the mechanical western style of art and saw nature as his true muse. Like most of his contemporaries, and even more, he catered to Pan-Asianism and began studying their scroll format to understand its unique techniques to control perspectives, objects, and space.

Trained in the cosmopolitan environment of Shantiniketan, he was much familiar with his contemporary European art movements, and most likely knew of Matisse’s cut-out paper works, which Matisse made from 1948 onwards. He used vibrant colour papers and newspapers, cutting, folding, and shaping them with his tactile sense into playful rhythmic forms. The images formed were figurative yet abstract, the forms pared down to their basics. Immersed in a world of darkness, quite paradoxically his creativity suddenly found expression in a burst of color. Benode Behari had once written, on the verge of despair: “... where there is light there is color.” Through innovation, the artist proved otherwise. He made his blindness a tool - a portal to a new dimension of visual perception, a new feeling, a new experience, a new state of being.

Benode Behari detached himself from the Swadeshi and the mythological themes of the Bengal school in Calcutta and explored his love for nature and Far-east aesthetics to establish an expressionist modern look of Indian art. When criticized by a friend for his position in the independence movement, he referred to his detachment by stating,

“ my objectives have always been around an artist’s ultimates -- have sought to know myself, and in the process unfold it to others, never forgetting that I am just one amongst the many.”

He was not a self proclaimed expressionist but his projection of his inner feelings and perceptions of the world inevitably placed his name in the history of Indian art as one of the lists eminent modern expressionists. In Stella Kramrisch’s words his ‘impersonal pathos’ was incredibly obvious in his paintings. We find traces of his expressionist tendencies and interpersonal relationship with art in his own words:

“ Art grows out of the emotional impulses diverse sensations of shape and gesture generate in us, this bright and colorful world. Art expression moves from emotional impulse to mood, from mood to aesthetic beauty. An artist’s creation can not attain its full stature until it brings into barking his experience of reality and his mind’s emotional bias.”