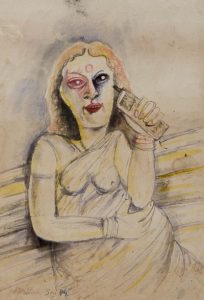 Paritosh Sen(1918-2008) studied at the Madras Art School under the mentorship of Debiprasad Roy Chowdhury. This was followed by his stay in Paris from 1949-1954, where he studied at Andre Lhote's School, Academy Grand Chamber, École des Beaux-Arts & at Ecole du Louvre. During his stay in Paris, he had the unique opportunity of meeting Picasso. He regarded this as an important experience of his life, which created an intense impact on his aesthetic awareness. On his return, he was drawn to Jain & Rajasthani miniature paintings. He studied these in detail. He was profoundly influenced by the technique the artists used to make space division. Despite the poverty & destitution of many of Calcutta's citizens, the humaneness & vitality of the city which he lived in since 1940, continued to enthuse him. The relentless optimism of its people, the joyous celebration of traditions & life, the vibrant colours all find a place in Sen's art. Sen was awarded the Lalit Kala Ratna, The Officer De L'orde Des Arts Et Des Lettres, The John.D.Rockefeller III Grant, The Kalidas Nag Award & the Abanindra Puraskar amongst other awards.
November 18, 2018 | View: 495 |   By: Admin