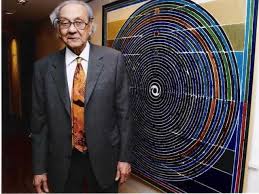 Sayed Haider Raza was born in 1922 in the village of Babaria, in Madhya Pradesh. His initial training as an artist took him to the Nagpur School of Art. After completing his initial training in Nagpur, he shifted to Bombay, where he studied at the Sir.J.J.School of Art. It was here, in Bombay he met his fellow friends like Souza,Husain,Ara & Bakre, that they founded the Progressive Artists’ Group. After receiving a French Government Scholarship in 1950, he left for Ecole Nationale des Beaux-Arts, Paris.

Raza’s themes were often drawn from his childhood memories spent in the forests of babaria. His style changed over the years, where hebegan with expressionistic landscapes, which later became rigid geometric representations of French towns & villages. By the late 70’s, his focus turned to pure geometric forms, & by the 80’s the circle or the “Bindu” became the central motif.

Amongst his vast array of awards, he received the Prix de la Critique in Paris in 1956, the Padma Shri in 1981, the Padma Bhushan in 2007, the Padma Vibhushan in 2013, the Legion oh Honour in 2015 amongst others. He served as a visiting lecturer at the University of California in Berkeley.

His work can be found in many prestigious collections like The National Gallery of Modern Art, New Delhi & Mumbai; The Lalit Kala Akademi,New Delhi; Bharat Bhavan,Bhopal; Chandigarh Museum; France,England,USA amongst others. Church in the village.