The real of the American dream: The portrayal of the realities of early 20th-century urban-America in George Bellows’s paintings George Wesley Bellows was an American realist painter, known as "the most acclaimed American artist of his generation" according to the Columbus Museum Of Art. Known for his bold depiction of urban America, Bellows' New York scenes depicted the crudity and chaos of working-class people and neighborhoods, and satirized the upper classes. From 1907 through 1915, he executed a series of paintings depicting New York City under snowfall. In these paintings Bellows developed his strong sense of light and visual texture, exhibiting a stark contrast between the blue and white expanses of snow and the rough and grimy surfaces of city structures, and creating an aesthetically ironic image of the equally rough and grimy men struggling to clear away the nuisance of the pure snow. Whether a cultural portrayal or a scenic view of downtown New York City, Bellow's works attempted to define what was real. In his paintings, we find the true image of the making of the country through the portrayals of the daily livelihoods and desires of the average American, depicting the realities of the subjects, whose lives were labored by the fantasy of the American dream. His realism not only essentially depicted what was real but also remains engulfed by its apparition - the phantom of the dream.

George Bellows was fascinated by the ongoing metamorphosis of his country. Bellows paintings were a daring and original record of early 20th-century America which chronicled America’s pursuits and passions. His subjects were the illicit boxing matches, the scrappy street urchins who lived in the slums, the massive construction sites that transformed Manhattan, the hardworking men and women who kept the American dream functional - the section of urban America which was kept out of the frame. Inspired by his teacher Robert Henri, Bellows painted the world around him - the realities of the rapidly changing cities and their people, clearly challenging the conservative practices of the National Academy which linked him with the anti-academic art of Robert Henri and the Eight, yet remaining highly popular, even amongst arch-conservatives.

In two paintings of George Bellows, namely Stag at Sharkey's and Forty-two Kids, we will venture into the world of the non-represented faces of America. We will see how we find ourselves inside the frame of the images, taking part, witnessing the pleasures of the average urban American. 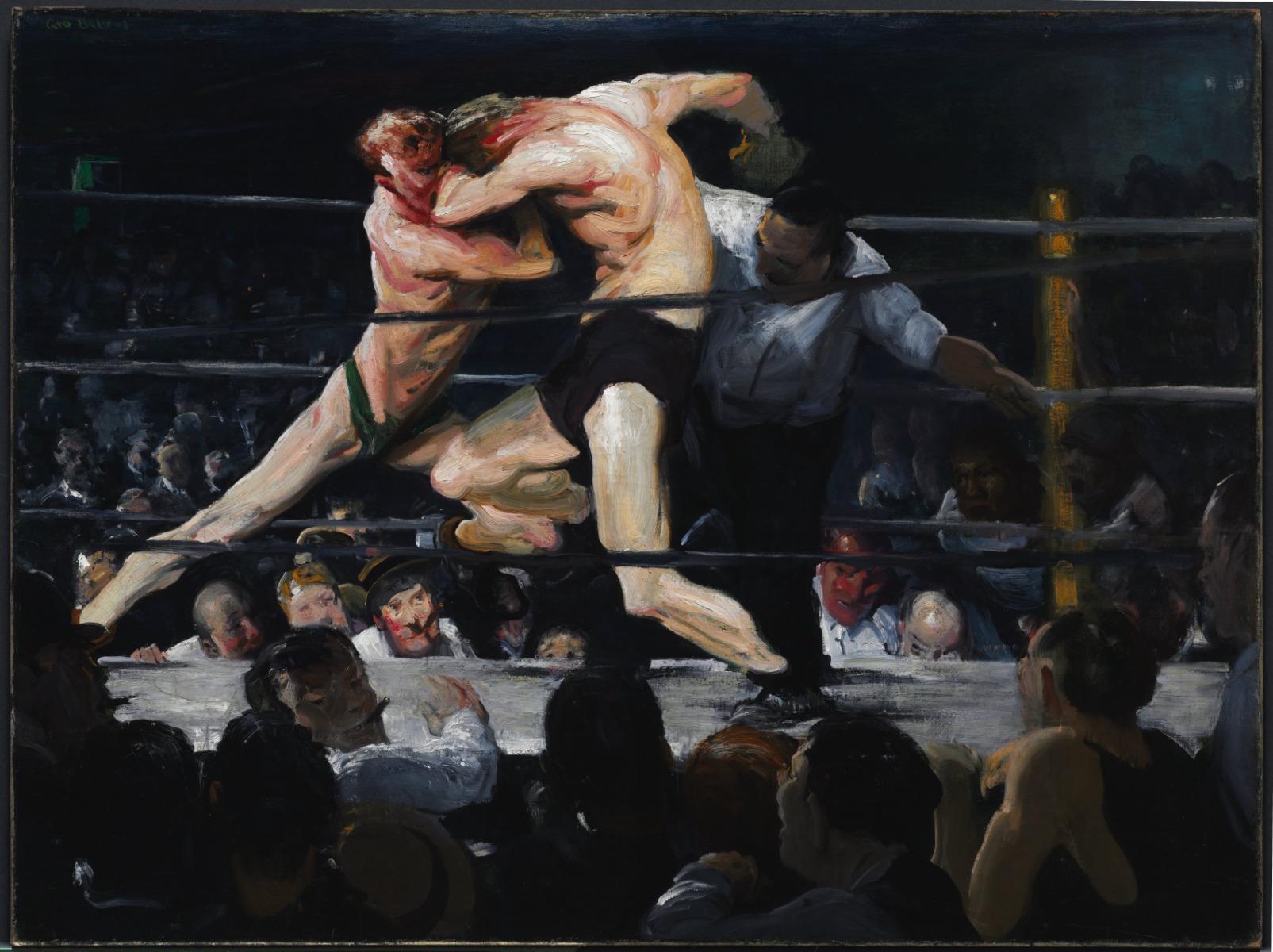 Stag at Sharkey's ( 1909 ) is one from Bellow's boxing series paintings where he honed in on the city’s illicit boxing matches with ‘the eye of the sportswriter’. The composition of "Stag" is perfectly balanced: the planted leg on the left and the referee's arm extending linearly on the right from the sides of a pyramid, whose foundation is naturally the mat. The boxers violently collide in the middle, like two forces of nature unwilling to give. The boxer on the right, painted in streaking brushstrokes, is a curling mass who courageously meets his swooping opponent in a forceful crush. Where the heads meet there is but a red, fleshy, bloody pulp. In the early 20th century, boxing became the center of professional boxing in America. The game was brutal and corrupt. New York State legislature banned it, repealed the ban, and banned it again. But boxing matches between members remained legal in private athletic clubs. This loophole was made use of. By giving the fighters one-night membership in the clubs the shows went on. Bellows who was an athlete himself back in his university days was drawn to boxing. The fighters in his paintings look like slabs of meat in contrast to Thomas Eakins’ Salutat, where the boxer is shown as the winner, standing in the classical posture, raising his hand to salute the audience, in the style of a gladiator. Bellows modernized the subject, his furious brushstrokes and thickly-applied paint resonating with the ferocious punches. The faces in the crowd watching the on-stage brutality are just as barbaric, their expressions ranging from violent ecstasy, amusement, horror, and anguish. As the audience of the painting, we find ourselves taking part in the show. We find it difficult to separate our consciousness from that of the immorality of the game as the painter places our position inside the painting, amidst the savage crowd. “I am not interested in the morality of prizefighting but let me say that the atmosphere around the fighters is a lot more immoral than the fighters themselves.”; Bellows said. 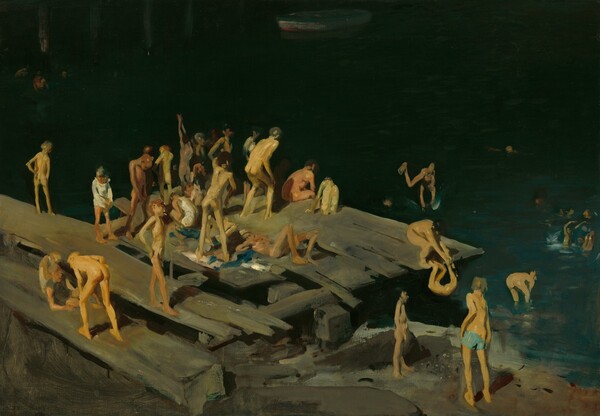 There really are 42 kids in George Bellows's "Forty-two Kids."  It was not a respectable picture. The boys are naked, they are skinny-dipping. One of the boys is peeing. Two are smoking. The title bears the turn-of-the-century slang, "kids" which referred to roaming young hooligans, who were frequently the offspring of working-class immigrants living in Lower East Side tenements of New York City. A sharp observer of urban life, George Bellows has sketched his streetwise subjects with characteristic vigor and economy of means. In 1908, the prestigious Lippincott Prize was awarded by the Philadelphia Academy of the Fine Arts which was promptly withdrawn as it was feared that it would be an impermissible insult to the donor of the prize. When asked if the nakedness of the boys was a subject of concern, Bellows had promptly replied, “ no, it was the naked painting that they feared.” The painter strove to expose conditions of life and social relations, and his empathy for his subjects is palpable. Bellows, of course, treated the kids' disreputability affectionately, painting their lives with shades of warm browns and grays, radiating humor and human warmth.

The world depicted in Bellows’ paintings - the illegal boxing fights, the working boys on a ramshackle lock was a universe away from the sea-side holidays favored by the impressionists who were his predecessors.  Bellows was one of the organizers of the Armory Show of 1913, which introduced European modernist art to American artists and critics. The show had a marked influence on Bellows, and later he supported many of the avant-garde art organizations. His paintings belong to the category of American realism but he, of course, was a true modernist. His robust and vivacious style aligned with America’s fascination with the masculine and energetic spirit, the ethos of the American dream - "life, liberty, and the pursuit of happiness”, the never-ending race of making something of oneself. His paintings showed the stark contrast between the affluent New yorkers and the working poor whose the predicaments of the country’s people. George Bellows’s paintings brought out the realities of the human condition as the nation pushed its way to the center stage of the 20th century - the real of the American dream.

The Art of Boxing: George Bellows, by Shaun Randol.