Lean and dressed in white, you could easily mistake Lalu Prasad Shaw for someone’s grandfather- warm, affectionate and full of wisdom. Much before his training at the prestigious Government College of Art & Craft, Calcutta, Shaw as a child sat silently in wonder and amazement as he watched his mother make alpona patterns on the floor of their modest house in Siuri, Birbhum. These formative and preparatory years were spent emulating his creative mother who instilled in him a love for drawing. Not far from his house, was the place where the Malakars (rural craftsmen) worked. They made the idols of the gods and the patas that were to be placed behind the idols. The young Lalu took an instant liking to their work and an ambition grew in the young aesthete to be an artist. 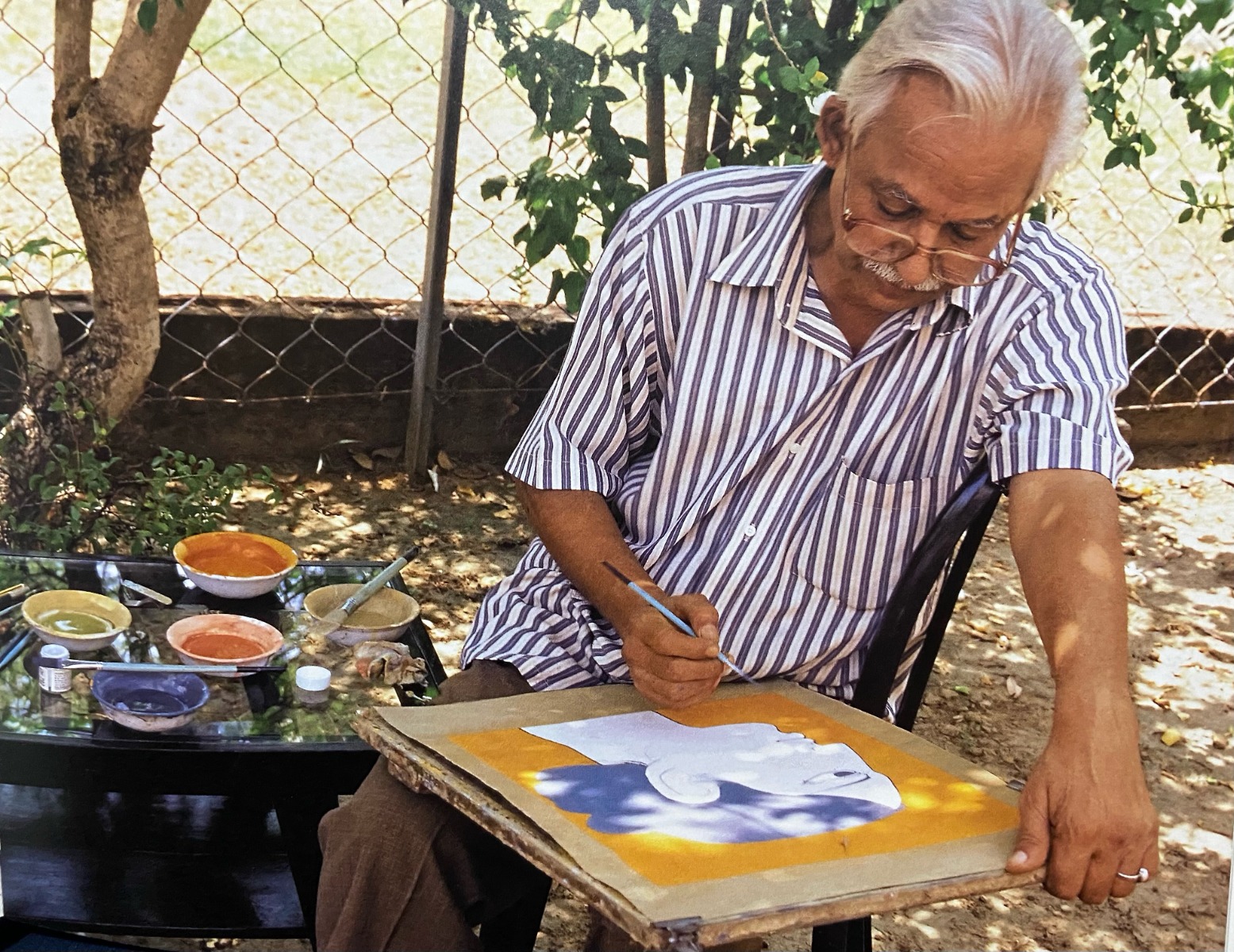 What Shaw learnt, in the process of recreating the chalachitra patterns embellishing the idols created by the folk artisans, as well as the floral designs integrated into the body of more elaborate adumbrations, was quiet strength and delicacy of his unpretentious paintings and prints that he studied eventually as aregular student at Calcutta’s art college.

Shaw’s first art teacher was Pinakinath Bhattacharya who taught art at the local school. In those days, the young Lalu was passionate about art, but never imagined about converting it into a profession. He was also reading Bengali magazines like Prabasi, Basumati and Modern Review. Shaw started by copying those works printed in the magazines and as a result he was training himself to be an artist. 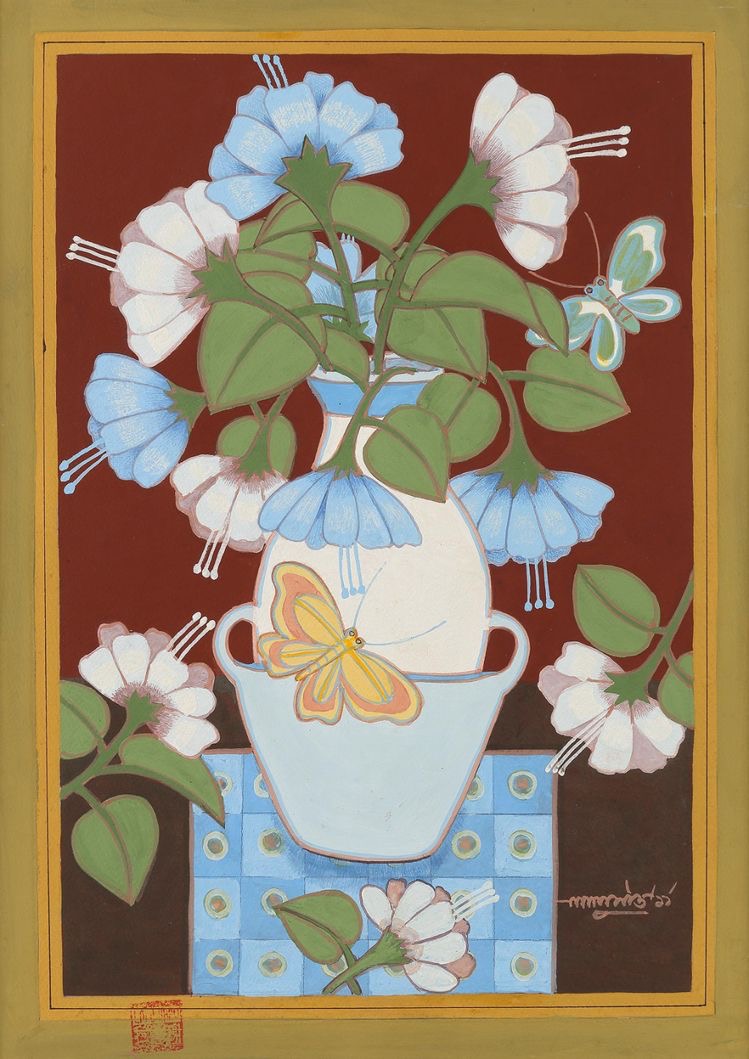 In 1953, when Shaw was of age, he was admitted first into the Indian College of Art and Draftsmanship, Calcutta. However, in a few months he left and got admitted into The Government College of Art and Craft, Calcutta in 1954. It was in the art college that Shaw learnt the difference between an artistic mind and a machine. He could not abide by the fixed technicalities. At the art college, Ajit Gupta was his favourite teacher in his first year. He often visited his house on Sundays to learn the techniques of tempera. Even today when Shaw works with tempera, the influences of Ajit Gupta on his style is evident. In his second year, Shaw studied under the legendary Gopal Ghose, Rathin Maitra, Anil Bhattacharya and Maniklal Bandopadhyay.

Like most artists of his generation, Shaw was acquainted with the Impressionists and Post-Impressionists during his college days. However he wished to come out of the training he received from the art college. He started practicing with abstracts and broke himself free of forms. In the 60’s Shaw was experimenting on how to retain the two-dimensionality of a picture. In 1967 he joined The Society of Contemporary Artists Group. Here Sanat Kar introduced him to graphic prints for the first time. Suhas Roy, who had just returned from Paris, taught Shaw the techniques of etching. In the process Shaw dedicated himself to print-making between 1966-1973. At the same time he joined his Alma Mater as a teacher under Satyen Ghoshal. Later, he joined Kala Bhavan, where he took up lithography and tempera painting seriously. It was during his stay at Santiniketan, Shaw felt an urge to revert back to tempera and wash paintings even while he was pursuing print-making. Since 1983, shaw devoted himself entirely to tempera. 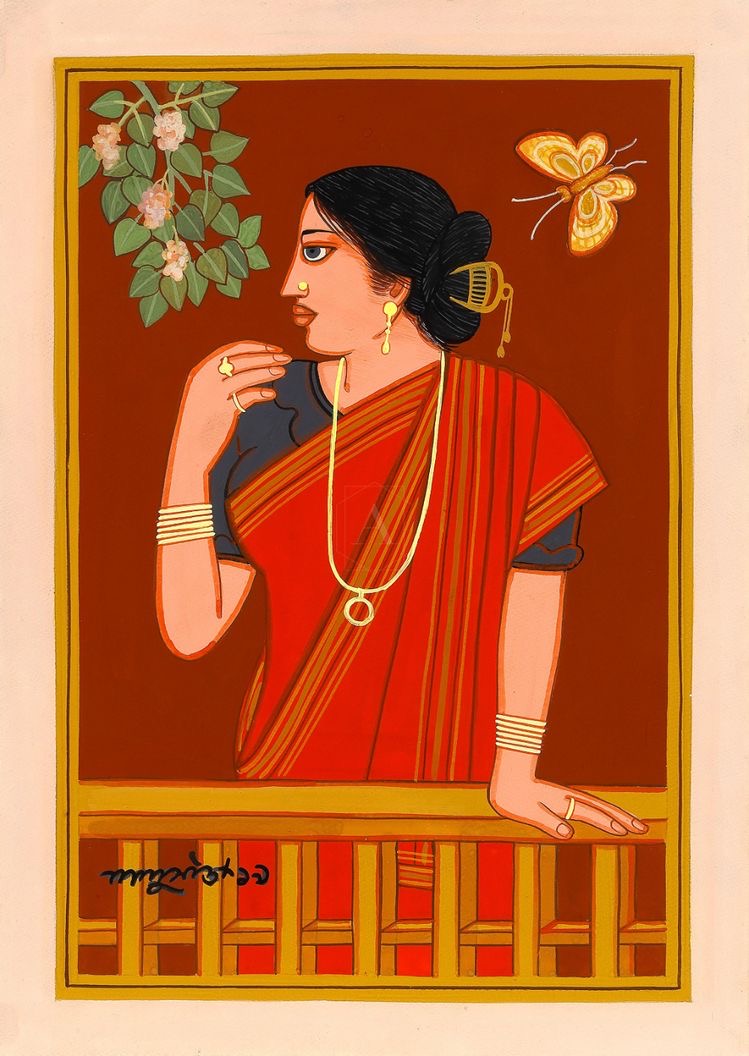 While teaching in Kala Bhavan, he found his students copying from the Lucknow Birds series. These were miniatures from the regional Mughal style. These influenced Shaw greatly. Soon he began drawing birds and capturing their movements. True in many of his works, the surfaces remained crowded with sunflowers and other bright flowers. These works remain highly decorative. To improvise on it, he added a border, reminding one of the Mughal miniatures. He also acknowledges the influence of the Kalighat Patas who fascinated him. The depiction of the Babu culture fascinated him greatly. He often picked up such traditional subject matter and treated them with a touch of contemporary elements. These themes got extended to Babu and Bibis of 2005. Shaw has always believed in straightforward subjects portrayed in strictly two-dimensional style. His popular Babu series has men and women of urban Calcutta engaged in feudal-style leisurely activities. Creating an ambience of harmony, his works may be traced back to the Kalighat patas.

Consequently, mere geometric shapes and forms of his earlier days gave way to flexibility and a kind of mute drama. This influence was also to be reinforced by his love for Far-Eastern art at Kala Bhavan. For Lalu Prasad Shaw, the journey continues.